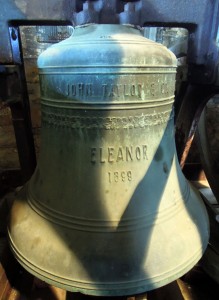 The five largest bells are the first ever peal cast by Robert Taylor of St. Neots, first of the Taylor Bell Founders in 1786. In 1887 they were rehung by their predecessors at Loughborough where the foundry still remains. In 1900 Taylor’s returned to add a smaller, treble bell.

The Taylor family originally lived in Riseley (our sister parish) and Robert Taylor was born there in 1759.  He was the fifth child and only son of William and Mary Taylor. He was baptised at All Saints Church, Riseley on New Year’s Day 1760. His father ran a grocer-drapery business in Riseley believed to be where the Fox and Hounds public house now stands. Robert’s father died in February 1777 and Robert showed no sign of wishing to continue the family business and moved to St. Neots sometime before 1780. Joseph Eayre had already established a successful bell foundry in the town and this is where teenager Robert found employment. Joseph Eayre died in July 1772, and his nephew Edward Arnold took over the business. Robert Taylor was apprenticed to Edward Arnold where it is clear from Arnold’s publicity material that Robert was both reliable and competent. In 1784 Robert was in charge of the St.Neots bell foundry when Arnold went to Leicester and by 1786 was in full personal ownership and St. Mary’s Church, Bletsoe received his first complete ring of five bells. In 1821 Robert started a bell foundry at Oxford. He died in 1830 and was buried in St. Ebbe’s Churchyard, Oxford.

Bell Four (Now Bell Five)
I TO THE POOR AND NEEDY AM A FRIEND FOR WHOSE RELIEF I CALL YOU TO ATTEND.
JOHN COLES AND NICHOLAS KING CHURCHWARDENS
Maker: ROBERT TAYLOR ST NEOTS FECIT 1786 (Diameter 38”, Height 27”, Weight 457kg)

The original tenor found its way to Great Gransden. It was originally believed to have been cast by Robert Taylor at St. Neots but after much research by Chris Pickford it seems more probable that it had been cast by Islip Edmunds of London (born in Melchbourne in 1737) for Bletsoe church. Edmunds was Robert Taylor’s foreman so he would have been familar with the St. Neots foundry. The tenor of the ring of the four original bells at Bletsoe was recast by Islip Edmunds of London in 1767. Nineteen years later, the parishioners decided to scrap their old bells and they engaged Robert Taylor to provide a slightly lighter ring of five bells. The old bells including the tenor were removed to the foundry, and at about the same time the tenor from Great Gransden was also brought in to be recast. If Edmunds was working for Taylor at the time he may well have had a hand in saving his handiwork from the furnace but by a great stroke of fortune it was discovered that the Bletsoe tenor was of the right size and note to be substituted for the tenor of Great Gransden. Taylor had presumably quoted for recasting the bell and he saw no reason to change his contract which is probably why he carefully removed the date and inscription and replaced it with R. TAYLOR FECIT.  The parishioners of Great Gransden took delivery of the bell in 1786 and paid the balance due 12 months later not suspecting that it had not been recast.
How interesting is that and thanks to Chris Pickford for his research.